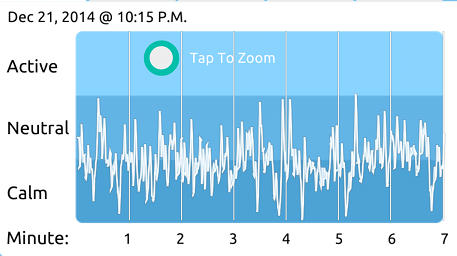 “Steve Jobs believed that Zen meditation taught him to concentrate and ignore distractions”- Walter Isaccson.  “He particularly wanted Apple’s engineers to learn meditation, to boost their creativity” -Les Kaye.  Steve Jobs isn’t the only successful businessman to see the benefit of meditation and calming the mind; Ray Dalio, Marc Benioff, and Jeff Weiner “all attribute no small part of their professional success to meditation“.   Interaxon’s Muse is an EEG wearable with seven sensors that measure your brain waves while you are performing guided focused attention exercises.

Scientific research indicates that meditation and practicing calming the mind can truly change the brain’s anatomy, and physiology, a phenomena is known as Neuroplasticity.  After training for long periods of time with Muse, you will be less prone to distraction and stress.   Muse session lengths are three, seven, twelve, and twenty minutes long.  Research suggests that longer sessions, such as the twenty minute session can increase grey matter density, reduce thinning of the prefrontal cortex, decrease amygdala activity (the part of the brain that initiates the fight or flight response), and increase resilience.

Muse’s seven sensors measure the electrical activity in your brain to determine if your brain is calm, neutral or active.

Active signifies your mind was wandering during the exercise, Calm suggest your mind was focused on the exercise and Neutral means your mind was neither active nor calm.  Because brain waves are so weak, it is important to follow the tutorial that comes with your muse headset to ensure the correct fit.  The app shows the image below which informs you if your headset is getting enough signal to provide an accurate reading.  To have an accurate reading all five oval shapes need to be filled it.  If the shapes are present but not filled it, the Muse headset is getting signal, but there is significant noise.  If a shape is missing all together, the device is not receiving any signal from that particular sensor.

Muse works in concert with the Interaxon’s Calm App, which is available on iPhone, iPad and Android.  The app connects to the Muse head set via Bluetooth technology and charges via micro USB.  Muse also provides a SDK for developers, allowing consumers to create applications for their specific needs.  The app provides two types of feedback during the session and after the session and provides longitudinal data.  Each time you use the device there will be a short calibration periods so that Muse can get a snapshot of your mind in an active state. You will be asked to think of sports teams, fruits, famous places and more to put your brain in an active state.  Once the calibration period is over, Muse will tell you to focus on counting your breaths and to breathe normally, which is a form of mediation.  Muse will provide feedback during your meditation session by producing sounds based on your current state of mind, active, neutral or calm.  A calm mind will produce the sounds of a tranquil environment and an active mind will produce the weather soundscape change.  Also, if you mind is calm for a long period of time you will hear birds chirping which is an added challenge to not allow the knowledge that your brain is calm to change your state of mind to active.  Once the session is over you can look at your data to determine how calm you were during the session.  The data shows a graph of your brain waves throughout the session and calculates a number of points you earned for the session.  You receive one point for every second that your brain is in a neutral state, three points for every second that your mind is calm and zero points for every second your mind was active.  Once you have used Muse for a long enough period for accurate longitudinal data to accrue, “Muse will unlock the Insights about you section”.  The “insights about you section” will inform you when you receive the most birds, what types of sessions you do most, what time of day you are the calmest and more.

I have been testing Muse for the past month and have completed 24 sessions, received 15,759 points, and earned a total of 73 birds.  I have always wanted to make mediating a habit in my daily life and had tried many different apps that remind you to mediate and time you while you are meditating.  However, I found it difficult to do so with no quantitative feedback to allow me to determine if I was actually progressing.  Muse has made it much easier for me to make meditating and practicing calming my mind a part of my everyday life because I am a quantitative and intrinsically competitive person.  For me, it is akin to swimming with a stopwatch, always trying to beat my best time.  Below are two graphs of data from seven minute sessions.  The one on the left shows the progression I have made since I began using the product. The one on the right was my attempt at completing a session after I got off the phone with a tow truck company that damaged my car and refused to pay, needless to say I found it very difficult to be calm and control my thoughts to think about counting my breaths. 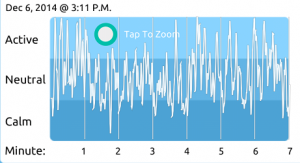 You can purchase your Muse at choosemuse.com