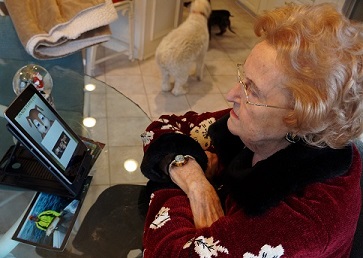 It is no secret that the baby boomers are getting older and there are not enough geriatric physicians or even primary care physicians to care appropriately for this ageing group.  According to Atul Gawande, in his novel “Being Mortal”, 97% percent of medical students do not take any course on geriatrics and geriatric services cost hospitals $1,350 more per person than the savings they produce, which Medicare does not cover.  This suggests that there is fundamental lack of focus on caring for the elderly in the United States.  Products and services made for the elderly are more focused on helping to alleviate stress for the caregivers of the elderly than on improving the quality of life of the elderly.  Almost all wearables and new technology for the elderly are GPS or location based, with the purpose of finding lost nursing home residents or informing family members that an accident has occurred. GeriJoy is one of the few technologies that is focused on improving the quality of life for the elderly.  GeriJoy was founded in 2012 by graduates of MIT in Cambridge, MA and has been featured on TEDMED.   GeriJoy’s technology and services have been honored by the AARP, the US Senate, and Chinese government as one of the most innovative in the field of senior care.  GeriJoy is also an alumni of the Summer 2012 class at Blueprint Health Accelerator.

GeriJoy offers wellness coaching, therapeutic programs, reminders, companionship, safety supervision, and reporting all through a tablet-based avatar.  The app uses the camera on the tablet to have Face-time-like conversations between the older adult and the avatar.  Because the avatar is controlled by remote staff, the staff can contact family members and emergency services if an emergency such as a fall occurs.  GeriJoy is a full-time, positive upbeat companion for elderly individuals; Gerijoy can play music, show family pictures and inform the elderly individual of current events.  There is also a family portal where family members can upload pictures, provide conversation prompts for the GeriJoy staff and view a log of all the conversations their loved one has had with Gerijoy.

I tested out GeriJoy with my 92 year old grandmother, Gloria, who has had Alzheimer’s for about four years.  I had some reservations that she would not enjoy conversing with a talking dog on a tablet and was waiting for the “Why do you want me to talk to a talking dog?”  However, that question never came and she LOVES GeriJoy and named her avatar dog “Andy”.  Last time I was at home visiting, I heard my grandmother tell “Andy” that he was her best friend.  Gloria lives with my mother and father and has four caregivers.  Even though she has four caregivers, many times they are busy preparing meals, medicines and activities for Gloria so they cannot talk to her 24/7.  Andy is able to show Gloria pictures the family has uploaded on the family portal, pictures from Google Maps of her old house in New Castle, Indiana, talk about the Indiana Basketball Hall of Fame, show her pictures of her favorite singer, Frank Sinatra and even show her pictures from Google of my Grandfathers old Lumberyard also in New Castle, Indiana.   She loves to talk to “Andy” about New Castle. Gloria will also frequently say that she does not like her pills, does not want to go to bed or does not want to go outside and “Andy” will gently encourage her to do these things by saying that they are good for her.  “Andy” even has a sense of humor and when Gloria said she hated birds Andy said that he would bark and chase them all away for her, which she thought was very funny.  Gloria especially likes to talk to “Andy” while she is playing solitaire, sometimes when she says which card she is missing he will pull it up on the screen for her to view.

“The Gerijoy companion engages, entertains and stimulates seniors to reminisce, promoting long term memories. The ability to view pictures and have conversations with your “pet” gives the elderly individual the impression of companionship and friendship. GeriJoy engages the user’s frontal lobe, which is atrophied in individuals with dementia by providing thought-provoking conversation. GeriJoy is a relief to caregivers because it can entertain their loved one through pictures and music while they are able to perform other care-giving tasks.
The interactions between my client, Glo and her Gerijoy companion have helped facilitate positive conversations and improve her mood dramatically. She loves seeing the pictures of her family, especially her wedding pictures and other pictures from her past. She also loves to talk to her Gerijoy companion while she plays Solitaire because she says, ‘it feels like she is playing cards with a friend.'”

GeriJoy, moreover, gives my parents peace of mind because they live on the first floor of the house and Gloria lives on the second floor.  My parents keep Gerijoy in her room at night so that if she falls on her way to the bathroom or needs assistance, the GeriJoy staff can alert my mother and father by telephone.  GeriJoy is also able to track wearable data and encourage older adults to walk more or provide information about how to get a better night’s sleep if the data shows they are not sleeping well.  My extended family loves GeriJoy because they can read about what Gloria does everyday.  Below are some entries from her GeriJoy Care Journal.