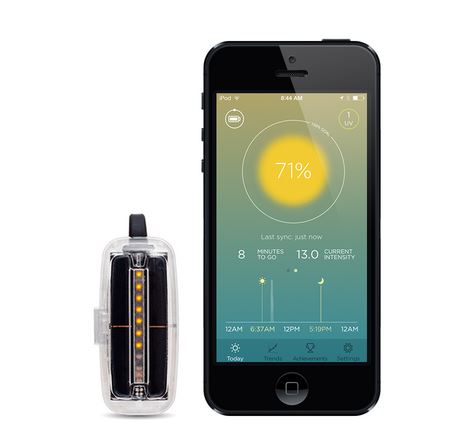 I think everyone can agree that weather, particularly sunlight can affect his or her mood. Although we know qualitatively that it feels better to be lying on the beach in the Cayman Islands than to be sitting outside in cloudy Seattle; we can’t measure quantitatively how many minutes of sunlight we need each day and at what intensity. These measurements are especially important for those suffering from Seasonal Affective Disorder (SAD), a mood disorder where individuals experience depressive symptoms in the winter due to a lack of sunlight.

A common treatment for SAD is bright light therapy (BLT), however because light boxes are not FDA regulated a patient does not know how much sunlight the light box is actually emitting and if they are meeting their prescribed amount of BLT. Other issues providers are seeing with bright light therapy are patient engagement and patient adherence.

GoodLux Technology’s SunSprite, a member of Healthbox’s 2015 Studio class tackles all three pain points associated with bright light treatment for SAD: quantifying bright light, engaging patients and increasing patient adherence. SunSprite has raised almost 1 million in outside investment and was also a finalist of the MassChallenge’s Summer 2014 Class. SunSprite measures light from visible light and UV sensors housed in the device. The device attaches to your clothing or accessories via a flexible magnetic clasp and has a solar powered battery. It syncs to the SunSprite app via Bluetooth technology and requires no cords or cables. The app is currently only available on iOS devices, but the Android app will be released in the next few weeks. Readers can purchase the device on Amazon or the SunSprite website.

GoodLux will not be seeking FDA approval because “we leave the depression diagnosis and treatment to the provider” says Edward Likovich, CEO of SunSprite. However, GoodLux technologies has several patents pending on their device and application.

The wearable is mainly used right now for depression, but there are people interested in it for sleep disorders because visible light activates your hypothalamus, which regulates your body’s biological clock. The visible light also affects your serotonin and melatonin, both of which impact your mood. Consequently, for bright light therapy (BLT) to treat depression, it is the visible light that needs to get in your eyes. The other byproducts of sunlight such as vitamin D, may be correlated with depression, but they are not important for BLT. Moreover, the surface area of your body receiving the sunlight does not matter like is does for vitamin D, which is absorbed by UV radiation on your skin.

Insurance reimbursements are starting this year for mental health telehealth visits. Mental health providers will find SunSprite helpful in monitoring patient engagement and adherence among patients that they prescribe BLT to. GoodLux technology recently announced a partnership with iGetBetter, outpatient care solution for patients with chronic conditions such as congestive heart failure or diabetes. iGetBetter found that providing scales and blood pressure cuffs to at-risk-patients helps prevent re-hospitalization, manage care and reduce costs. There is a high rate of co-morbidity among patients with chronic diseases and depression and depression lowers patient engagement and adherence. Therefore, re-hospitalization rates can be reduced even further by utilizing SunSprite to reduce depression, motivating patients to be actively engaged in their health.

I reviewed the light-sensing wearable while using the NatureBright SunTouch Plus Light and Ion Therapy Lamp, while snowboarding in Telluride, CO and while performing my daily routine in Boston, MA.  Below is a screenshot of my daily routine in Boston (Sunday-Thursday) and my weekend (Friday and Saturday) snowboarding in the sun in Telluride, CO.  It’s pretty clear from the graph that I don’t get enough sunlight in the winter, some of the days I received no sunlight. 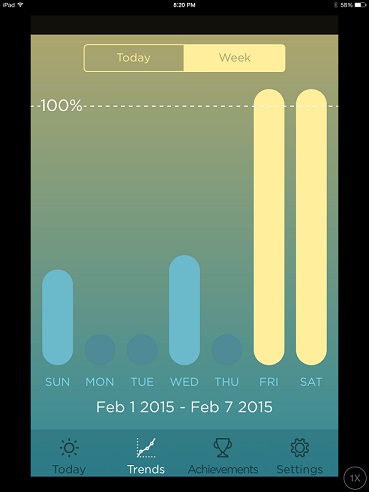 This realization that I was not getting enough sunlight brought me to my next experiment of trying out a sun lamp.  I bought one of the cheapest sun lamps on Amazon, the NatureBright SunTouch Plus, not knowing the differences in quality of sunlamps and assuming it would work okay.  Sitting in front of the sun lamp felt a little bit like I was on the beach. Because it is so bright I assumed it was working.  However, even in front of the sun lamp I wasn’t getting enough sunlight.  Therefore I taped the SunSprite device to the sun lamp for three minutes to see if that would increase the intensity of sunlight.  The intensity of sunlight the SunSprite received taped to the sun lamp was six times as much as when I was wearing it.  I then put the device twelve inches away from the sun lamp and tested it at that distance for three minutes.  With the device taped to the sun lamp I received 12% of my daily needed sunlight, at 12 inches away I received a mere 2%.  This is the downside of lack of FDA regulation for wellness devices, there are less standards for wellness devices, such as the sun lamp than there are for FDA approved devices.  Without SunSprite providers and patients have no way of knowing how much sunlight they are really getting.  Nonetheless, the negative aspects of the lack of regulation will be far outweighed by competition and innovation of devices like SunSprite. 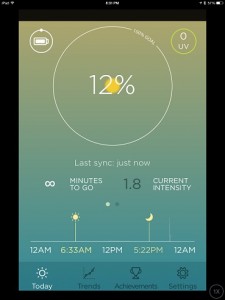 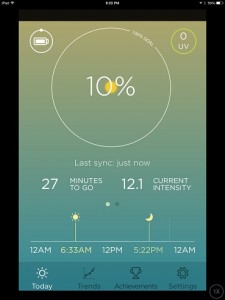