Judy Faulkner, CEO of Epic had a one-on-one conversation with Greg Meyer, Chief Clinical Officer of Partners Healthcare at the World Medical Innovation Forum on April 29, 2015.  At the conference Faulkner explained how Epic, one of the largest EHR vendors in the United States, got its start.  When Faulkner was at the University of Wisconsin, she was asked by a group of physicians to create a system that would allow providers to define their own data elements, create their own screens and keep clinical information. In just one year, Faulkner built an innovative clinical database system with the patient at the center.  Faulkner said, “It was important to put the patient at the center because there are too many data elements (about 120,000) and systems cannot interface well enough, which would hurt the patient.”  After completing the clinical database, Faulkner worked in many different departments in the hospital doing various clinical programming tasks.  Her clients would tell her that their peers wanted access to the solutions she had built for them and encouraged her to start her own company.  At first she was hesitant and replied that she did not know how to start or run a company. However, after numerous requests she acquiesced and decided to build her own company with the mission statement of “Do Good, Have Fun”.

In 1979 Epic began as a patient database, which now runs on Intersystems Cache, that later added scheduling software in 1983.  Epic was initially valued at a mere $70,000 and the ownership was divided among Faulkner’s customers who provided equity.  It is hard to believe in today’s venture capital-saturated environment; however, Epic never received any outside venture capital.  Epic is also one of the only healthcare informatics companies that has never acquired another company or product.  Faulkner said, “Even if you acquire products and rewrite them, they were written to be optimized as an individual product and optimization of the parts does not mean optimization of the whole.”  Epic has no plans to go public, “because the difficulty of going public means you can no longer focus on what is the right thing to do for the product and you cannot ignore the need for increasing shareholder value.”   Currently, Epic has no budgets, they just project revenues and review expenditures, and they do not have a marketing or public relations department.

Even though some critics say that Epic does not want patients to have access to their data, Epic is truly a system for patients because it has ten times as many patient users as it does provider users.  Epic’s patient health record (PHR) is called MyChart, which helps patients stay engaged in their care and stay healthier.  Faulkner explained that patients want to fill out their own questionnaires and was surprised to discover that patients would rather use a kiosk to fill out their information than go through the staff at the front desk.  Additionally, hospitals that utilize Epic have learned that patients prefer to schedule their own appointments and many of Epic’s clients allow patients to do so.

The subject of this year’s World Medical Innovation Forum was Neuroscience, so there was a lot of talk about patient privacy and security.  Epic tells their customers to inform patients that all patient information will be sent to other facilities if hospital interoperates with another entity, even though psychiatrists’ notes do not get sent over. The reason for this is that sometimes similar information can be found in primary care notes, which can get sent to other facilities, and laws around sharing behavioral health information are inconsistent.  Epic has found that only one-percent of patients do not want their records to be shared with other facilities, so Faulkner believes that the privacy policy should be opt-out rather than opt-in to err on the side of patient safety.

A second type of interoperability is a health information exchange (HIE). Epic’s HIE Care Everywhere, which uses the Consolidated-Clinical Document Architecture (C-CDA), can communicate with any vendor that follows the standards put in place by the Office of the National Coordinator for Health Information Technology (ONC).  Although, many media sources and vendors claim that Epic is not interoperable, in the month of April 2015, Epic customers exchanged 11.7 million records with Care Everywhere, a product which was started in 2005, many years before Meaningful Use promoted interoperability. Care Everywhere started off using Integrating the Healthcare Enterprise (IHE) profiles such as XDS, XCA and participated in IHE Connectathons which paved the way for the CDA.

Epic was ranked number one in HIE by KLAS the past 2 years: 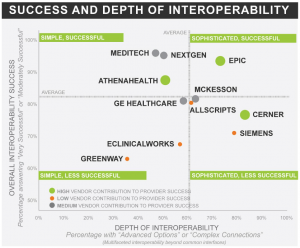 Epic has active connections to provider practices, state and regional HIEs and HISPS with most of the major vendors such as Cerner, Athenahealth, Surescripts and Relayhealth.  Epic is also a promoter of the eHealth exchange and many of Epic’s clients participate in the exchange with the VA, the DOD and the Social Security Administration.  There are more Epic connections at the VA than with any other EHR.  In December 2014, Epic joined the Argonaut Project launched by Health Level Seven International to promote the next-generation framework of interoperability, Fast Healthcare Interoperability Resources (FHIR).  The first set of FHIR protocols, which are documented on open.epic.com will come out in the 2015 version of Epic due out in June.

Some people in the industry do not see Epic as an innovative company. However, Eric Helsher, VP of Client Success at Epic said, “We were the first to put out an advanced patient portal in MyChart, we were the first organization to integrate with Apple HealthKit, and we were the first to have a patient using an EHR app on the Apple Watch.  Remote patient monitoring, like with HealthKit, we’ve being doing that type of stuff for nearly a decade with vendors like Honeywell, Phillips and Numera, where patients could have a scale or a glucometer at home and send data into Epic.  Epic customers can also use APIs and web services to create custom views and pull live data from Epic.  Epic has billions of API calls per year from third-party products that are integrated with Epic for specific functions.”