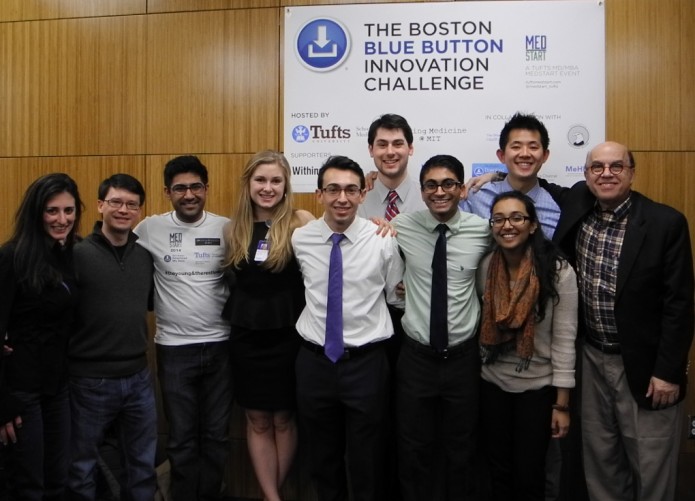 This past weekend (1/17-1/19), I attended the Tufts Medstart Blue Button Innovation Challenge that was held at Tufts medical school in Boston, MA.  Blue Button is primarily a government initiative that allows patients to download their electronic health records (EHRs).  The hackathon kicked off Friday night with two keynote speakers, John Halamka and Catherine Rose.  Saturday morning began with Dr. Sachin Jain’s bold speech after which participants took up the challenge to come up with the best idea that empowers patients to access and use their EHRs via the Blue Button initiative.

The first keynote speaker, John Halamka (Professor of Medicine at Harvard Medical School, Chief Information Officer of Beth Israel Deaconess Medical Center, Chairman of the New England Healthcare Exchange Network (NEHEN), spoke passionately about the ever increasing attacks on the hospital’s data infrastructure, citing that while a stolen credit card number could be sold for a dollar per card, a patient’s medical record fetched a thousand dollars each prompting potential fraud. Strict consequences both legal and financial are associated with security breaches. So when considering new partnerships and technologies he prioritizes vendors who consider themselves accountable for data integrity. He also talked about the 140,000 ICD-10 codes that will replace the current 18,000 ICD-9 codes and how specific they were to the point of being humorous such as burn due to water skis on fire.

Catherine Rose who is an engineer from Stanford and the mother of a special needs child spoke next.  She detailed her frustrating experience with medical records and how they have evolved throughout her daughter Alexis’ life.  In Alexis’ early years, Catherine struggled to compile all of her daughter’s medical records from multiple organizations, many times having to chart and analyze the data herself.  She first got access to a patient portal in 2009 which has been a major help to her in keeping track of Alexis’ records.  She is hopeful about the future of HIE’s and EHR’s that will help Alexis and other special needs children receive better medical care.

Dr. Sachin Jain, who is the Medical Information and Innovation Officer at Merck and Co. and former adviser to the National Coordinator at the ONC-HIT spoke on Saturday morning about the lack of ambition in Health IT because innovators are too focused on money and getting acquired. He then talked about the importance of staying true to your idea by not taking the pilot program because great ideas can frequently fade away in pilot programs. He advised the participants that while we are conditioned to be polite, he believes that innovation is something that happens when you’re sometimes impolite.

The organized chaos began on Saturday, where all participants split up into 15 separate groups to prepare and present to a panel of judges, who would chose 4 winners on Sunday evening.  The winning teams were a mobile app that implemented a head injury diagnostic test including eye tracking, an application integrated with medical devices to allow patients to monitor their health, a web based tool for primary care physicians (PCPs) to improve their ability to recommend preventive care to patients, and a wrist band that created a safe and simple patient tracking and EHR beacon through a Bluetooth LE-enabled technology.

In summary, the weekend was an exciting and educational event that brought together a diverse group of professions interested in a common goal to come together to innovate to further develop the field of Healthcare IT while having fun and networking.